So the ride from the castle at Cardona was our last real day of riding. I must say I felt a bit sad knowing that today I’d be going to the Catalunya MotoGP. Not because I didn’t want to go to the race but it marks the end to this fabulous adventure on these fabulous roads in these fabulous countries.

Today unlike previous days we stuck to the organised ride plan as we wanted to get to the MotoGP track with enough time to hang out and watch the qualifying. The plan was only about 130km to the track so we didn’t have to get going too early as a lot of these places haven’t been serving breakfast until 8am.

Once we hit the road we intended on stopping for a coffee before we got there but in no time we were on the freeway and at the track by 10:30.

By the time we parked and found our way in, qualifying for moto3 had just started so our timing was perfect.

And then the guys at IMTBikes had not finished with us as their route back to our hotel led us up one last winding road overlooking Barcelona.

Race day – this was a fairy straightforward ride out to the track … just follow the line of bikes. And there were thousands of them. Luckily on both days were able to find fairly recognisable locations to park.

With close to 100,000 spectators at the circuit it was pretty amazing. They are very passionate about their Motorsport over here. 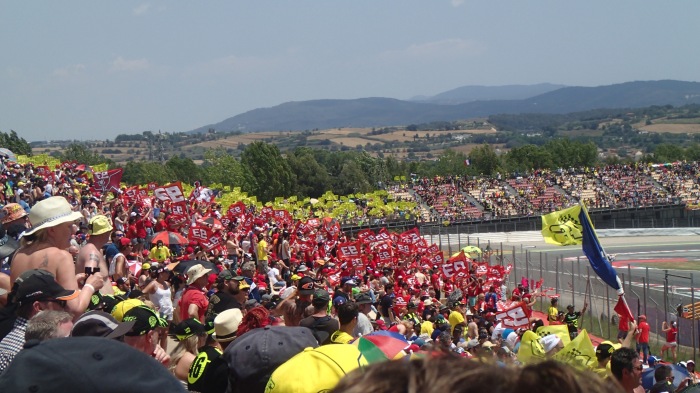 The colour of the Marquez and Rossi fans

And while I was taking the following shot of Marquez hunting done Rossi in corner 12, Lorenzo and Iannone were hitting the deck on corner 11. 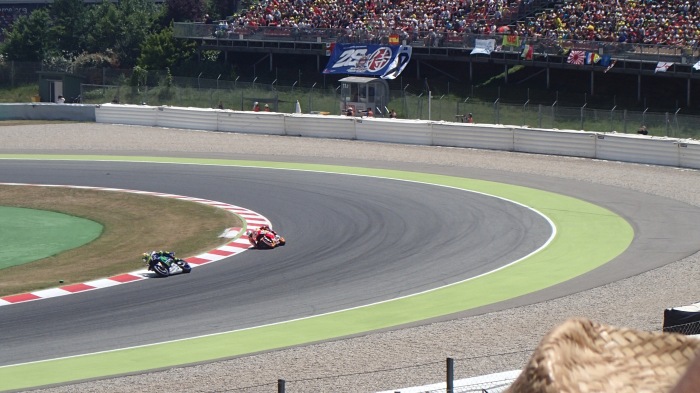 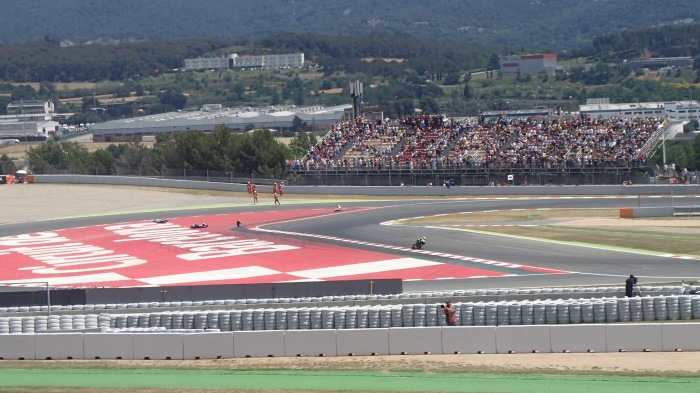 Lorenzo and Iannone going down 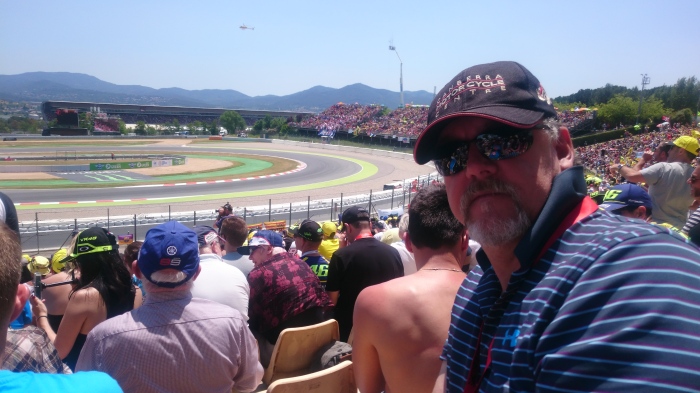 Keith and I were discussing the trip over dinner tonight and really struggled to pick out highlights of the ride as the whole trip was excellent. Yes there were a couple days riding in the rain but that really didn’t affect our mood. Yes it would have been nice for it to be all sunshine, but coming over the Pyrenees in fog and snow was very memorable, it just added to the sense of awe of the place. Yes we had some pretty rough roads (a couple we choose) but we found some really interesting places along these roads.

When I first found out that I had someone else along on the trip I have to admit that I was a bit apprehensive. Riding with others can be great or very frustrating for a number of reasons. And for a week long trip and only two of us doing it it could be awkward to ditch them and say “you’re on your own buddy as I’m outta here”. I quickly realised that I had nothing to worry about as we got on really well and our riding styles are similar. I think overall Keith drank more coffee than he normally would and I more beer. And we certainly ate more than we should as the places we stayed at had beautiful meals (which were included in our tour). I’d certainly like to hang out on another riding adventure sometime, somewhere in the world.

And after the racing had concluded we headed back to Barcelona to hand the keys in of these nice little BMWs. Over the last week we travelled just over 2,500km, 1,000km of which was in addition to the organised tour route.

So tomorrow I leave Spain and head home knowing that there are still many roads here that I need to explore.

One day.
I will put together some final thoughts on the trip and our route when I get home.

11 thoughts on “All good things must come to an end”

Out cruising around #dairyfarmershill, #Canberra, #VFR750, #SV650
Not the best way to finish the day. Lucky I had a spare fuel filter. #fuelfilter #ZX14R #Kawasaki #sideoftheroadsurgery
Lunch stop in walwa #ZX14R #walwa #benelli
Seemed appropriate for our ride #ZX14R #1400GTR #Kawasaki #ss1600 #IBA #ironbutt
Out for a ride #ZX14R #1400GTR #Saturn #solaraystemdrive
Enjoying a day off with the family at Floriade. #Canberra #Floriade2019
Enjoying a night ride in the outback. #Kawasaki #ZX14R #NightRide #ledlights
One of the newer silo art (Feb 2019) around. #Grenfell #Siloart #Kawasaki #ZX14R
Heading west to Wilcannia #ZX14R #Kawasaki #motorcycletouring 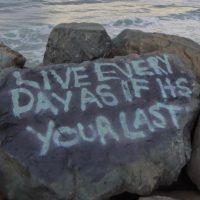 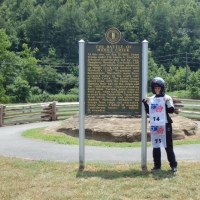 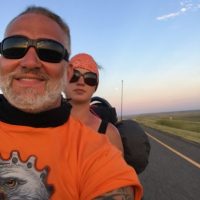 The adventures it takes to make a shiny Siany.

learning to number my days

The Adventures of Pillion Piglet

Butt Lite IX and beyond

Closing the gap between life as you dream it and life as you live it © Fuji X10 & XT1 Photographer - Windtogo.WordPress.com