My first car, when I was a teenager, was really unreliable. In fact it was so bad when my dad answered the phone in the middle of the night (way before caller ID) he didn’t say “who is it”, but simply said in a sleepy voice … “where are you?”  So I really can’t complain now when I too get those phone calls.

A month ago I got a call from Emma on the way home from work … “dad my bike made a funny noise and now it doesn’t feel right and there is a banging noise”.  Upon inspection it was pretty clear what had happened – the bottom mount of the rear shock had sheared off!  This left the bike to just bounce along on the spring.  Certainly not ideal.! 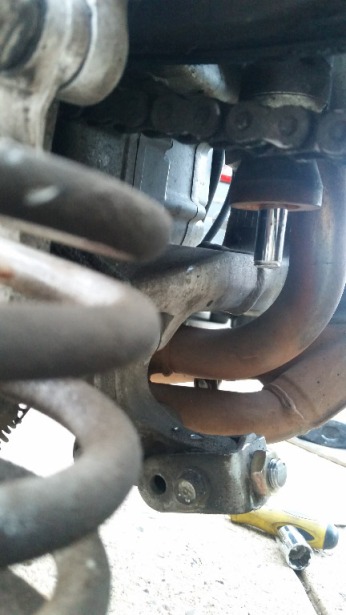 Emma’s bike is a naked (no fairing) 2003 Suzuki SV650 which had been lowered and the seat sculptured out as well by the previous owner (thanks Dene). This suited Emma perfectly as she is just 151cm (5 foot) tall. It’s a great bike, light, relaxed ride position, easy to manoeuvre, and a great torquey v-twin motor (especially for someone Emma’s size).  One of the big problems with the SV series is that some of the components are really taken from the bottom shelf and that is especially true of the budget suspension the bike comes equipped with.

So what to do?  The bike has over 90,000km on the clock so do we save money and just replace the old shock with the same unit or look at upgrading it.  After making a few calls to different wreckers a second hand OEM shocks with low miles was going to cost a couple of hundred dollars so no doubt a new OEM unit would be double that.  Emma loves her bike and is planning on hanging onto it so we decided to take the opportunity to improve the bikes suspension so she has a much better bike to ride.  After a number of calls to different suspension companies I ended up chatting to Adam at Suspension R Us who was fantastic.  In the end we settled on a Wilbers 540 (nothing too fancy) shock factory lowered by 50mm (another 25mm lower than what it was) with a spring rate set for Emma.

Looking at the old OEM shock next to the Wilbers replacement shock you can see just how budget the OEM shock on the SV is.

But … that now leaves the saggy baggy front suspension.  There’s lots of forum chat about front end transplants for these bikes using the much higher spec’ed GSXR front end.  However, they require a lot of work and quite a few mods to get them right.  And quite frankly, I don’t have the time for this amount of mucking around.

Given we had just spent $650 on purchasing a new rear shock it made no sense to leave the old saggy front suspension.  So Adam suggested that a great first step upgrade would start with a nice set of Wilbers progressive springs.  Currently the front end is only lowered by dropping the forks through the triple clamps by 25mm to match the adjusted rear shock.  While the new springs are the same length we got 35mm travel reducers that in effect would lower the bike by 35mm.  So to level the bike we only needed to drop the forks through the triple clamps by 15mm. 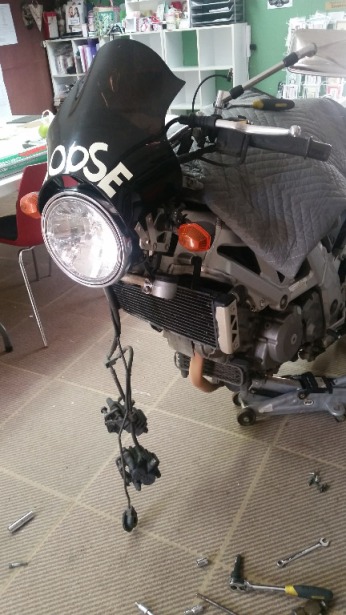 Spacers cut down by 35mm 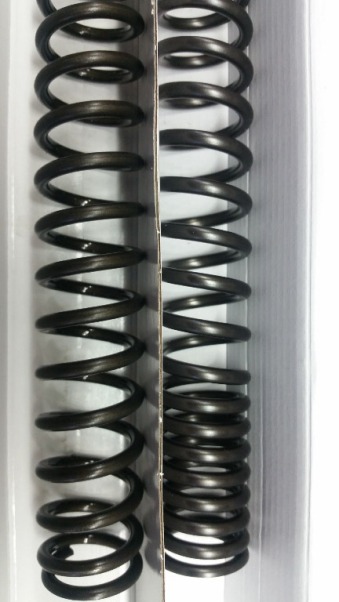 Confession time … I read the instructions.

It’s been awhile since I’ve pulled forks apart let alone make any alterations to them.  But in the end it was pretty straight forward.

When I got the springs and travel reducer I couldn’t get my head around why I add in a 35mm spacer and cut down an existing spacer by 35mm to end up with forks 35mm lower.  Isn’t that a net effect of zero difference.!  My head hurts.!  But they go in the damper assembly effectively limiting how far the stanchion can travel (in this case 35mm less travel) which is why you then need to cut the spacer down by 35mm.  It makes perfect sense when you see it.

And the finished product.

The 35mm reduction in travel is visually quite noticeable.

not reduced – 25mm through clamps 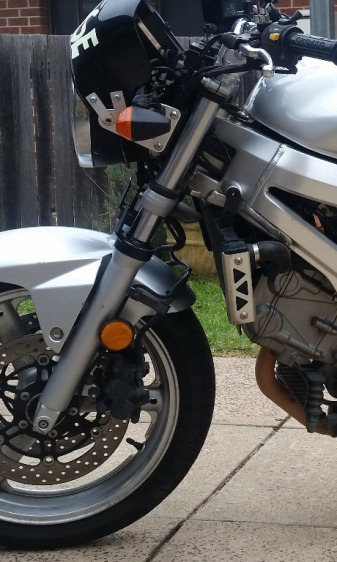 After a quick spin Emma reported that the bike feels much firmer and just wants to go around corners but she will need a decent ride to get used to the new suspension.  Sounds like a good excuse for a ride to me.

Dad can now stand down … until the next call out …

8 thoughts on “Dad to the Rescue”

Out for a spin on the 14
A bit chilly
Another painted water tank. This time at MacKay
The end of another day
Good morning Townsville
Heading to Cooktown for a spin
That was awesome
#paintedwatertank
#Siloart
Silo art
What a beautiful place on a beautiful day
Enjoying the sunshine in a lovely Easter weekend