I am consolidating old ride reports I’ve published on various forums over the years onto my WordPress site.  This is a ride report from a FarRide in February 2011 to Nambucca Heads, NSW.

It seems that the rule for Nambucca Heads’ FarRides is to have wet weather gear close.  Real close.

My plan was simple, a casual run north taking in new and different roads, camping at the Apsley Falls camp ground, then in the morning a nice run down the Oxley, call in and hand deliver a birthday card near Port Macquarie before a run to Nambucca.  Then after lunch in Nambucca Heads head home via Walgett.

So with start docket safely tucked away, wet weather gear on I headed north.  The threatening rain hardly eventuated, with only light showers.  A splash and dash at Goulburn to ensure that I make Lithgow without the need to push.  By the Abercrombie river crossing the skies had cleared and the wets were getting unbearably hot so they had to come off. 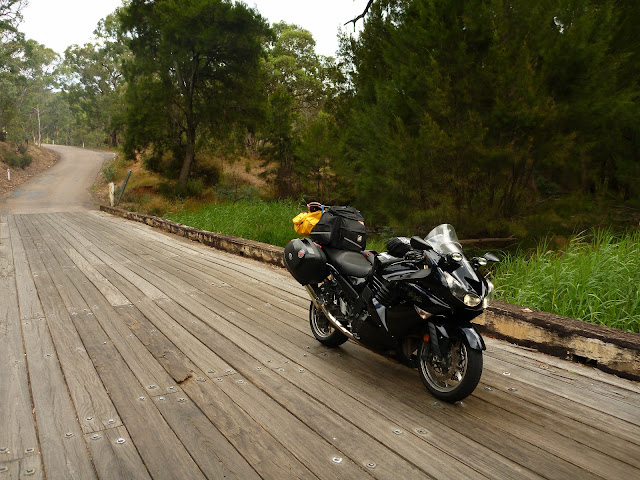 On my list of roads was bears ride #33 through Tarana.   After passing Black Springs I saw a sign to O’Connell.  At this point I went off the reservation and took this road.  Within a couple of kilometres I realised why this wasn’t on my route with over 15km of dirt.  I opted not to turn around and push on.  How bad could it get?  Well the dirt got pretty rough and pretty loose, but the tar was quite a nice tar road weaving through the countryside. 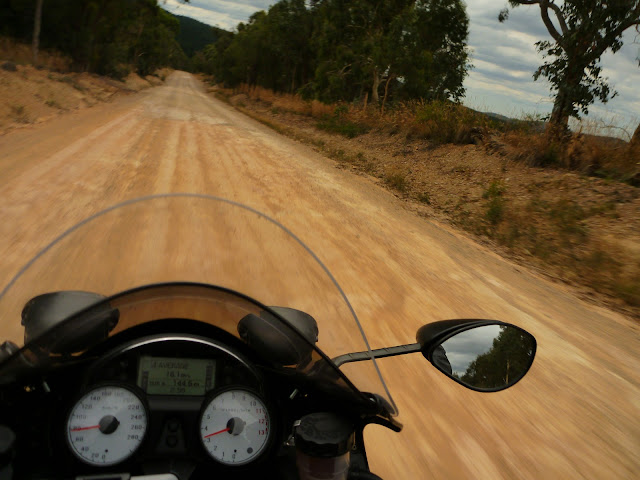 Planned fuel stops, Lithgow, Mudgee and then Tamworth via Merriwa and Scone.  Running bang on time.  From Tamworth I head to my camping spot at Apsley Falls.  The night was glorious, very little wild life around, the air was clean and crisp, the HIDs lighting my path.  I just wanted to ride.  But I also wanted to enjoy the Oxley in the daylight. 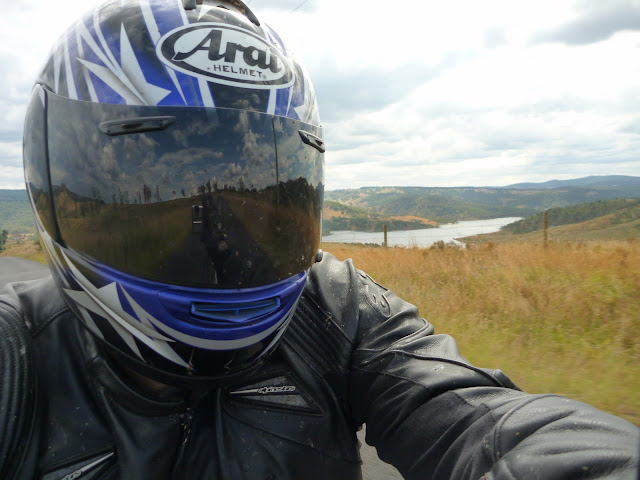 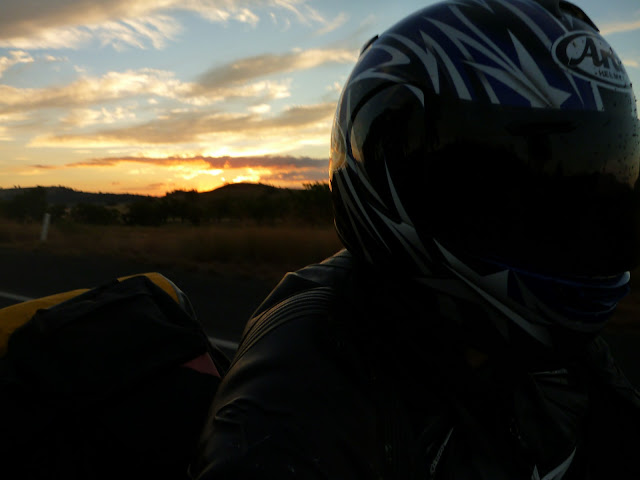 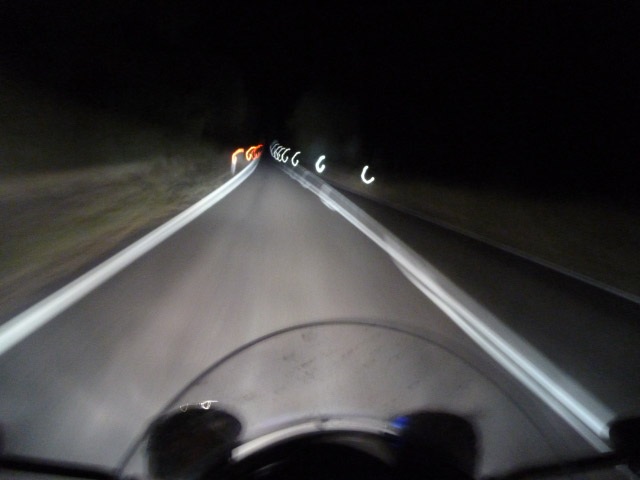 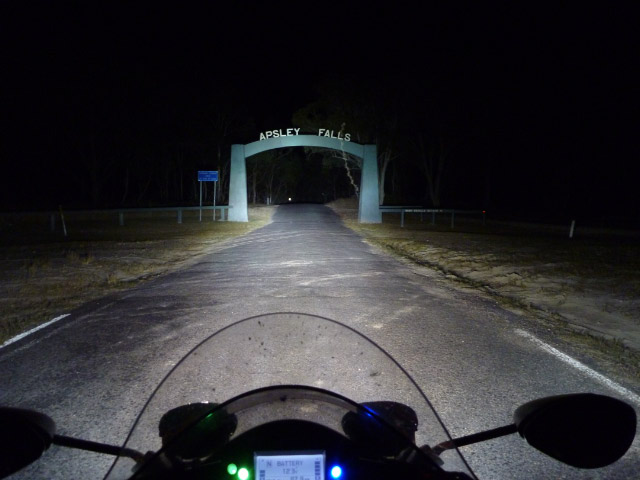 In the morning I enjoyed breakfast and coffee whilst watching the sunrise.  Nice.  Then check out the falls before hitting the road. 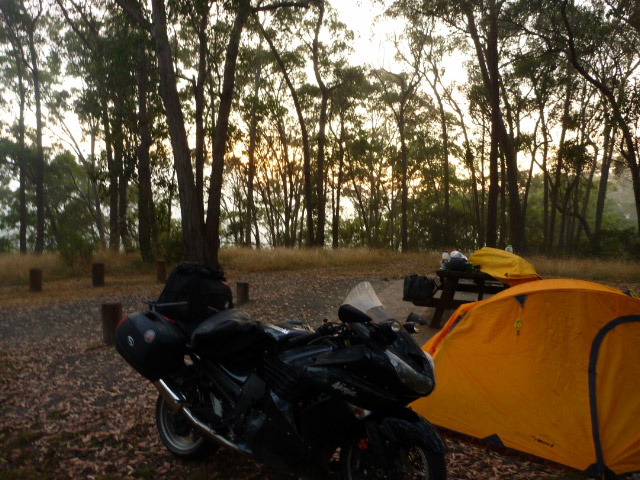 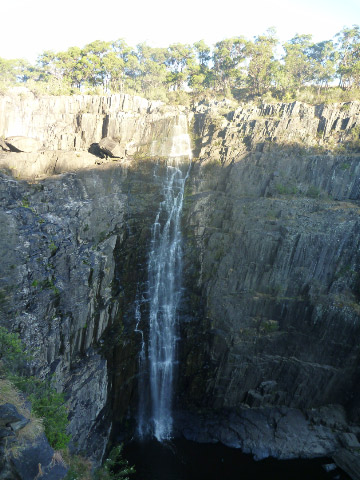 Now to the Oxley.  Bring it on.

One thing I really enjoy about FarRides is meeting fellow FarRiders going in odd directions to the same locations.  It was very hard to miss Ox with all those lights heading west though.  Hi Ox.  And meeting Kooler at the top of the mountain with a melted mains fuse on the ST.  I had heaps of time up my sleeve so I was happy to hang around to ensure that the ST was going to fire up. 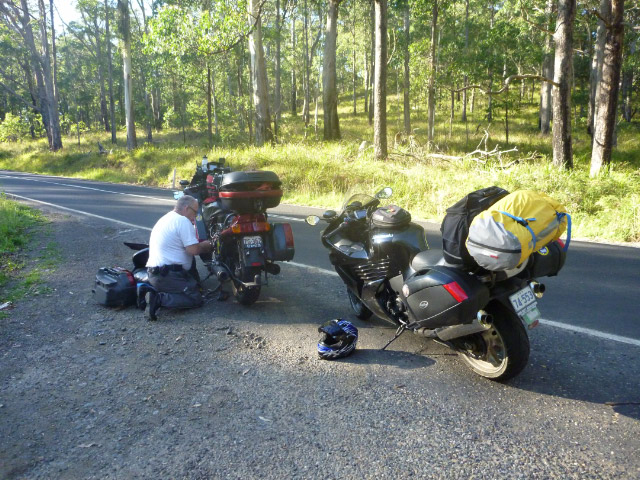 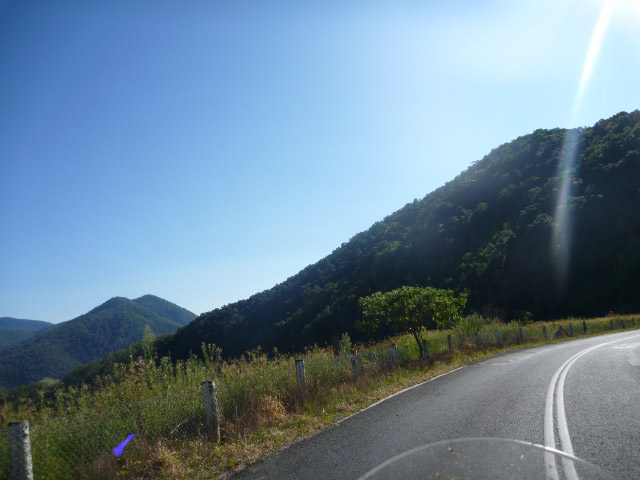 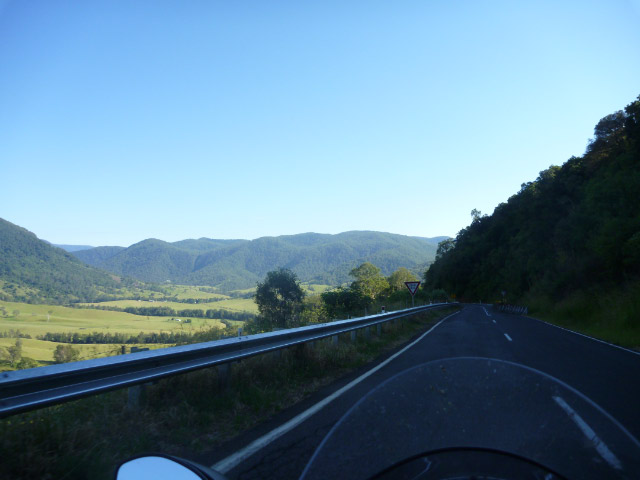 Did I say I Love the Oxley!

Riding up the Pacific highway confirmed my decision on not using that road all the way..!!  Nambucca here I come.  Wow there’s a lot of bikes there already as I roll in at 12:05. 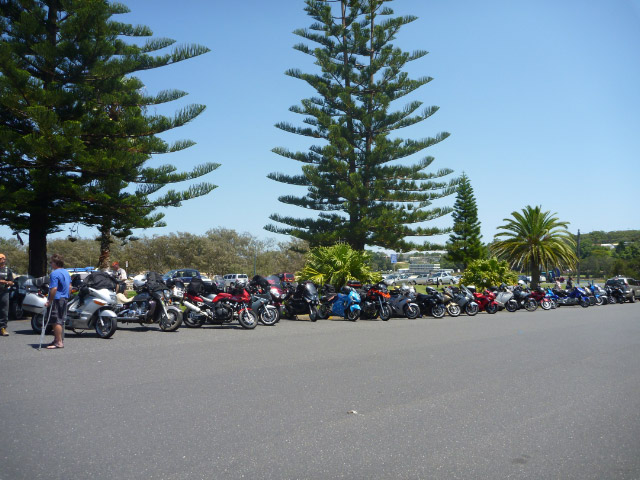 It was great catching up with everyone.  Seeing old and new friends.  Sorry folks but I have a leave pass for the weekend so after a quick shower I’m outta here.  The plan was head to Warialda and camp on Saturday night.  As I came over the Dorrigo mountain the clouds were looking angry and the chance of getting wet was quite high.  I was hoping that I’d skirt around the north of the storm but that was not to be.  On with the wets. 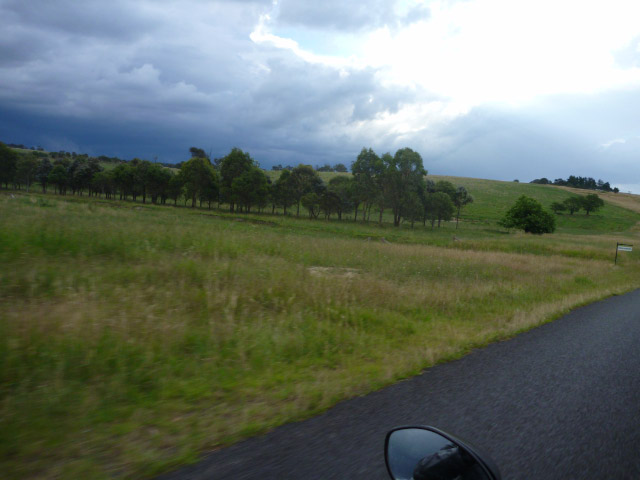 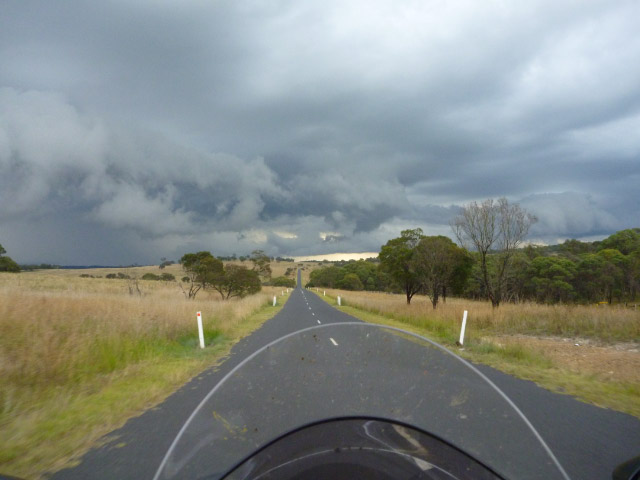 On the way to Guyra I passed a young couple on the side of the road struggling to put a large round bale of hay on their cruiser ute .  It took a few minutes for the scene to register as to what was going on.  Once it had I spun around and headed back.  With a bit of repositioning, and using the sideboards as ramps we were able to get the bale on the back of the ute and tied down.  Man doing a bit of physical work in plastic wet weather gear certainly makes you hot! 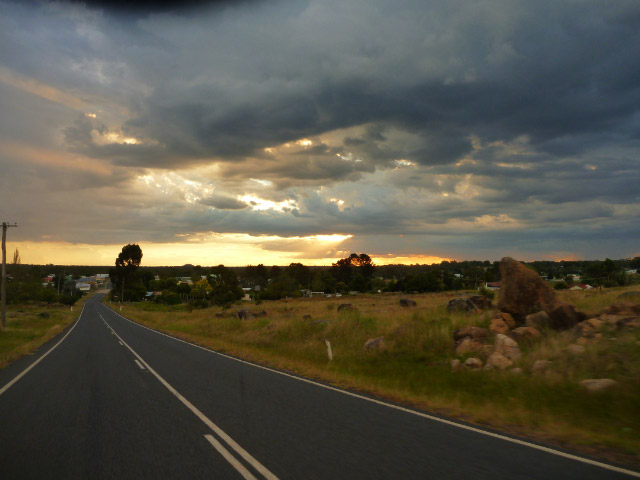 By Guyra the rain was getting quite heavy.  Tingha (above) was dry but as I approached Inverell it started again.  In Inverell I dropped in to say hi to the in-laws and then decided that pinching a dry bed here was better than camping in the rain 30mins down the road.

Up early, sneak out of the house, and head west. 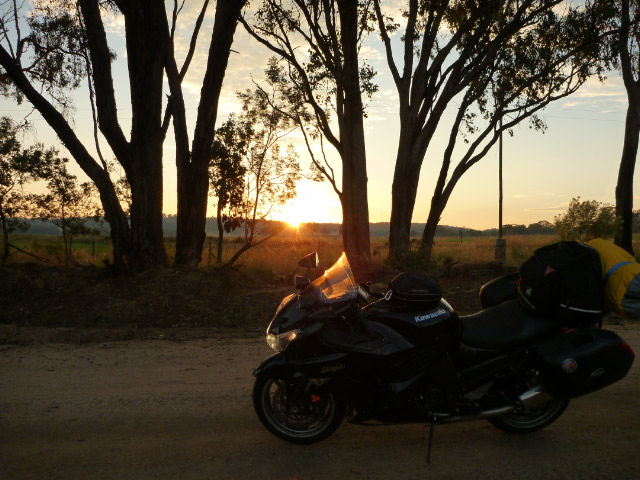 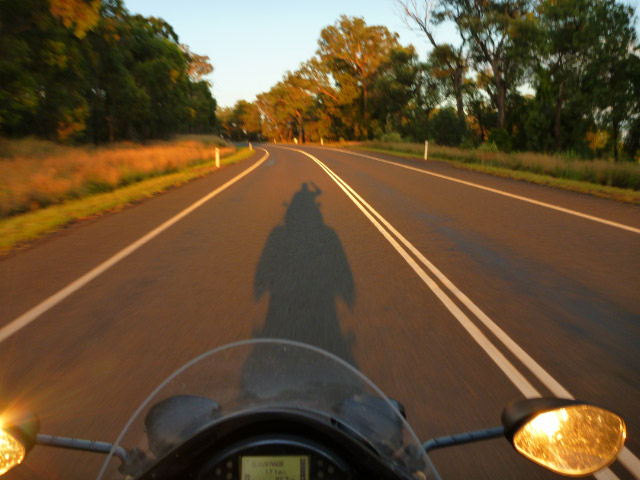 Note to self.  Next time I create a route on mapsource add a fuel icon to the towns that I want to fill up in. I was out of Moree by about 5 km before I realised that I should have filled up, so back I went.  I had intended on going up to Lightning Ridge to have a look and had spent about 30 minutes or so debating with myself what I should do.  Last week I looked up road closures and the Lightning Ridge road was closed about 20km south of Lightning Ridge but due to open on the Friday.  So the issue I was looking at was – I had fuel to make it to Lightning Ridge, hopefully they have fuel.  If the road is still closed 20km south then that is a 100km detour, I wouldn’t have fuel for that.  Or do I go the 20km into Walgett get fuel and then head back.  Well this went round and round.  Fuel calculations were done.  A full risk assessment was carried out.  The thought of having to push the bike wasn’t too appealing.  I get to the T intersection and there’s a big road closure sign.  So the whole debate was a moot point.  So I went south.

I was struck by just how much water is still lying around and the number of water birds around.

Here are a few more random photos from the rest of the trip home. 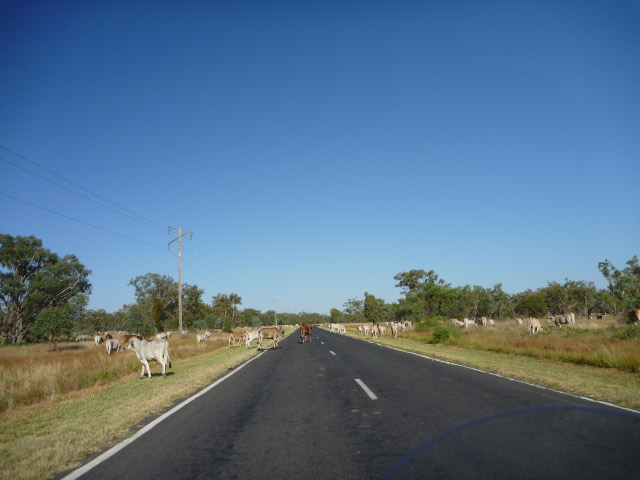 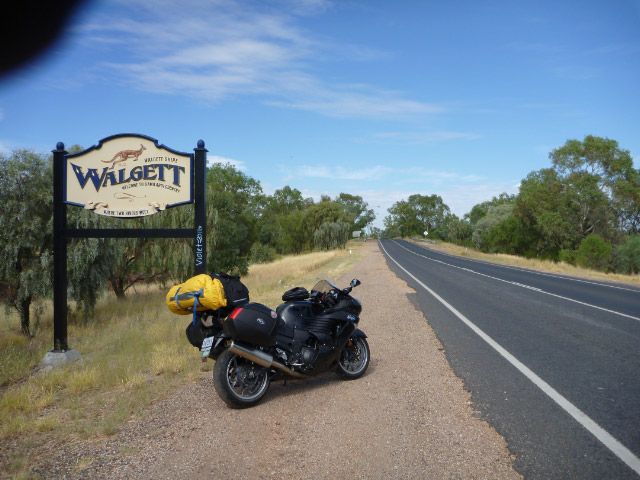 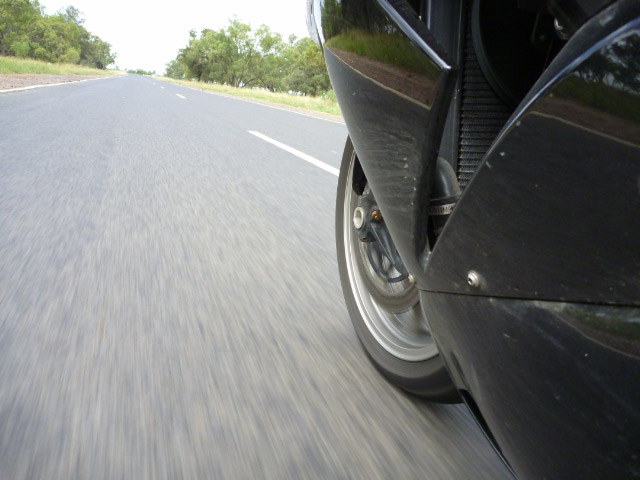 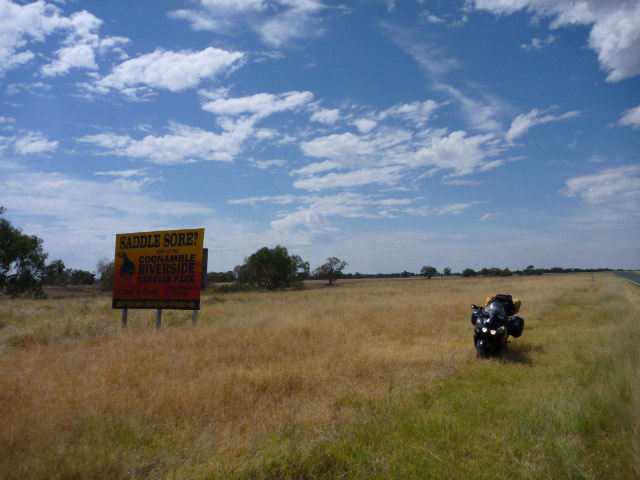 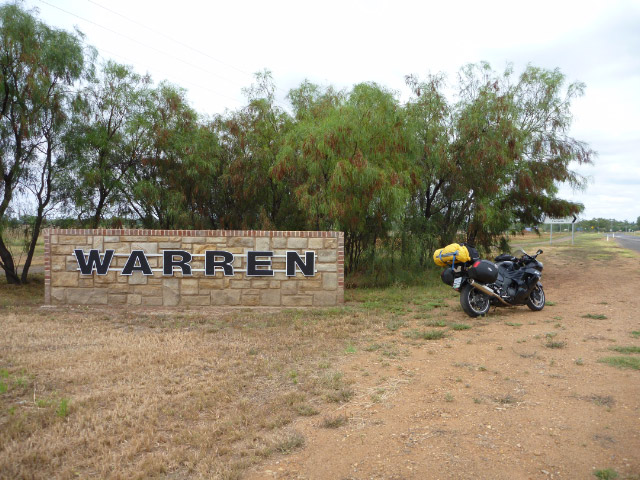 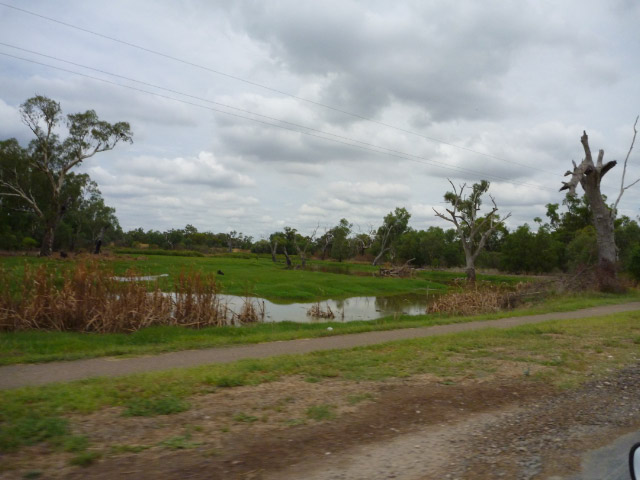 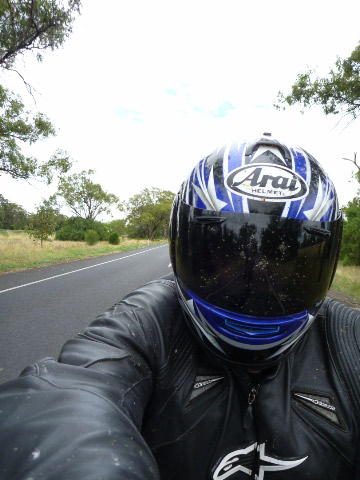 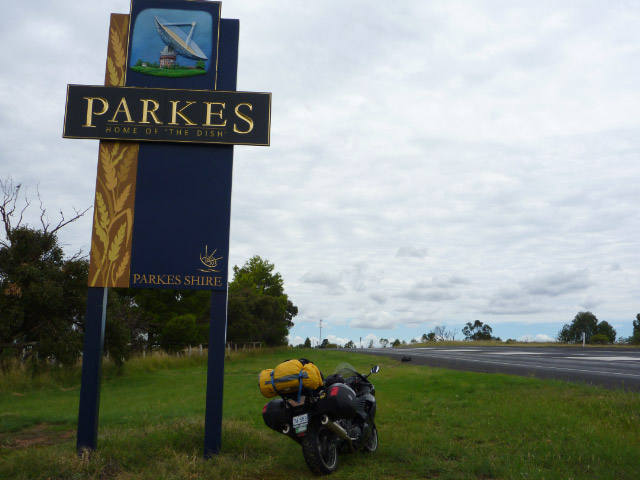 Home by 7pm Sunday with a total of 2,550km for the weekend.  A very enjoyable way to spend a weekend.

My how 1 week changes things.  As of today this is how my bike looks. 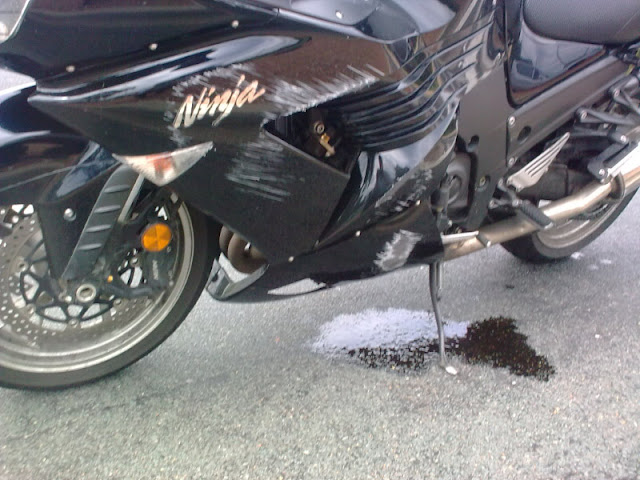 Got rear ended at an intersection on the way to work this morning so the Zed is back in the shop.