I remember pulling into Arches National Park on the bike in 2013 when it was 117oF (47C) and there was no way I was walking anywhere in riding gear. But this place captured me and I really would like to share it with Deb.

Fast forward to 2018 and we have now completed the third phase of our adventure in the US and have handed back the bike. When putting this trip together we had the choice of flying home from Denver or carting all our gear west and flying out of another US city. Two things still remained on our list for this trip – I wanted to show Deb a little bit more of the Utah I discovered on my ride in 2013 and we wanted to catch up with some Stampin’ Up! friends in Salt Lake City.

Heading out of Denver it was funny being in a car after two weeks on a bike. I felt like a beginner – I was all over the nuances of driving on the right but my sensory perceptions hadn’t yet adjusted to doing it in a car. I missed the bike in the traffic – but I have to admit the air con was nice.

Our route west effectively was to get on the I70 and head west. And with 75/80mph speed limits you can certainly cover some distance. It staggers me why in a country as big and as vast as Australia that we don’t have more realistic speed limits.!

I know when you live in a place you often take the surrounding scenery for granted. But the landscapes you go through when driving around here is remarkable, mountains, to barren plains, to open farmland, to Canyons. Just remarkable.

Sometime ago someone commented on my blog that I should get off the I70 and take the back way into Moab following the river on route 128. What an inspired idea. Thank you. While undoubtably much slower than the freeway it is supposed to be one of the most scenic drives – and I’d have to agree it is a stunning introduction to landscape surrounding Moab. 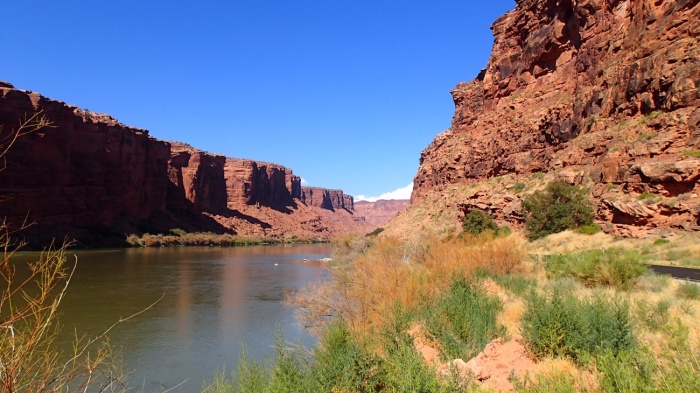 It’s amazing how things work out. While on the bike tour we each spoke about our various plans post bike ride. It turned out that Alain and Monika from Switzerland were not only going to Moab after Denver but were staying in the same motel, so we arranged to have dinner in Moab.

It was great to hang out with Alain and Monika for an extra night.

The one thing I really enjoy about travel is getting to know people from all over the world, understanding a bit about their culture and way of life. So hanging out with our disparate group for two weeks was great.

Saturday was a big day for us in Moab. It was going to be high 90’s and I wanted to get out and have a look at the delicate arch (which is one of the prominent symbol/picture used in Utah) before it gets too hot as it’s a 5km walk. At this time of day the park is also a lot quieter as you beat all the hordes in busses who pass through the park. For someone who is fit this would have been a pretty easy walk but I’m not that fit and we are at a higher altitude so the walk took it out of me. But once I got there all I wanted to do is sit and take it in. I know Deb was waiting in the car for me but I found it hard to drag myself away – just one more photo, just another minute to sit and gaze out into the canyons. It was so tranquil. 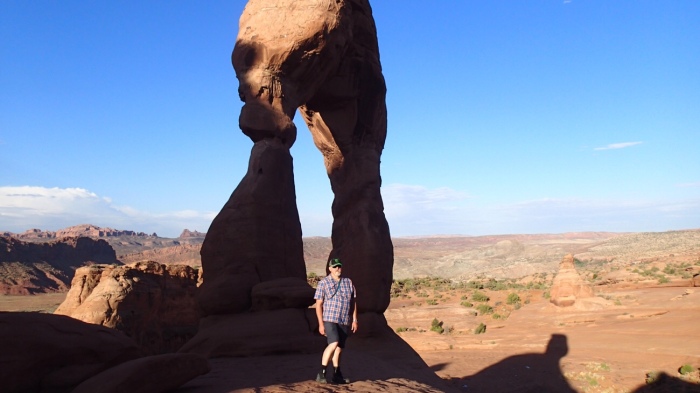 It’s not hard to see why they call this national park arches as there are naturally formed arches everywhere. 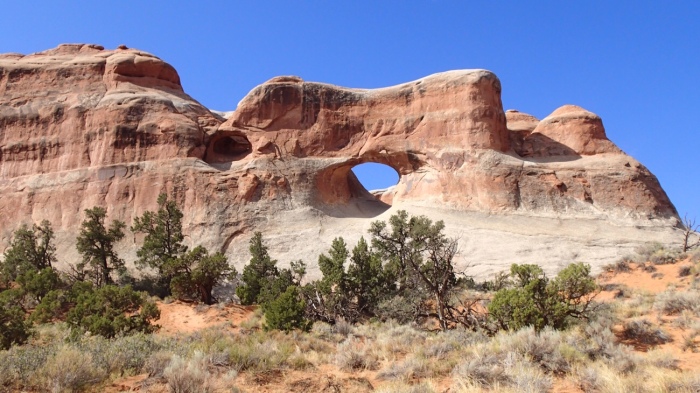 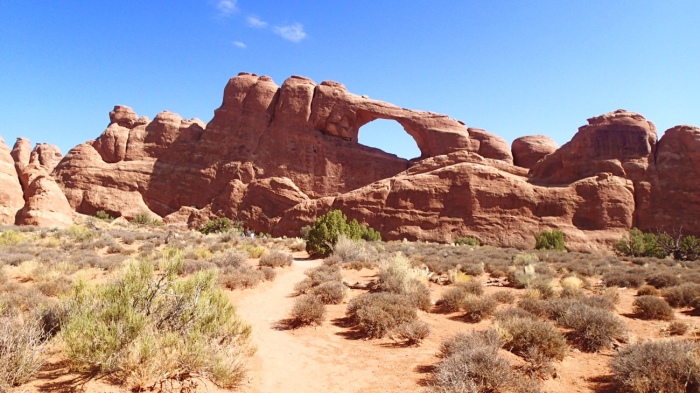 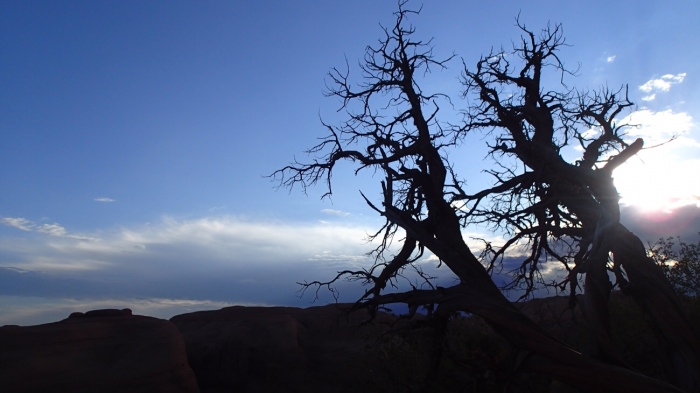 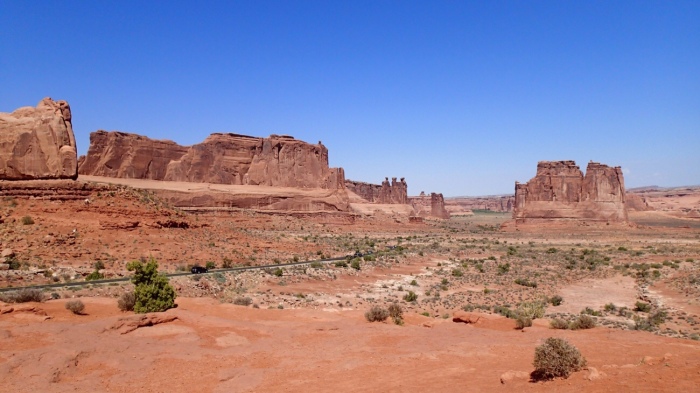 By this time it was getting onto lunchtime and we’ve had a big morning so we headed back to Moab and sat outside under misters in a coffee shop for lunch and then headed back to the motel for a couple of hours of rest before hading back out into the heat.

After our break we headed out to Dead Horse Point where you look down on a U bend in the Colorado river way down in the canyon. But sitting looking out on the canyon it just goes for miles and miles – you can see the land level around you and where the land has eroded around it. You can easily spend lots of time at these places just exploring all the nooks and crannies so we wandered around for a few hours taking it all in and clambering around the rocks – and getting too close to the edge for Deb’s liking!. 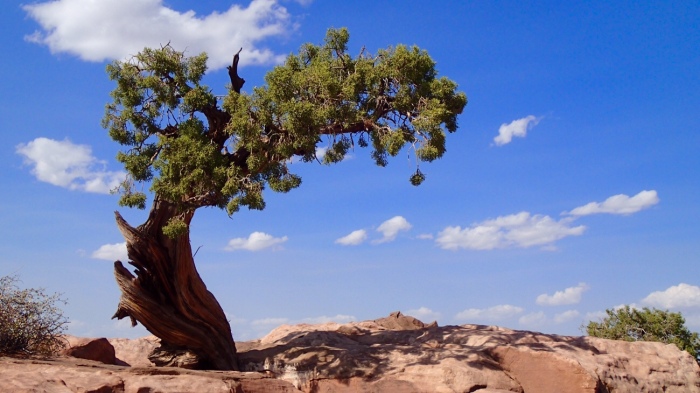 We really didn’t have time to go to Canyonlands National Park but we were only 4 miles from the entrance so we headed down just for a peek. We only made it as far as the visitors centre and looked over the edge and you can see all the four wheel drive tracks heading down and around the canyon – oh to have a week/s here and hire a Jeep or a little side-by-side (which are registerable here) and go exploring!! 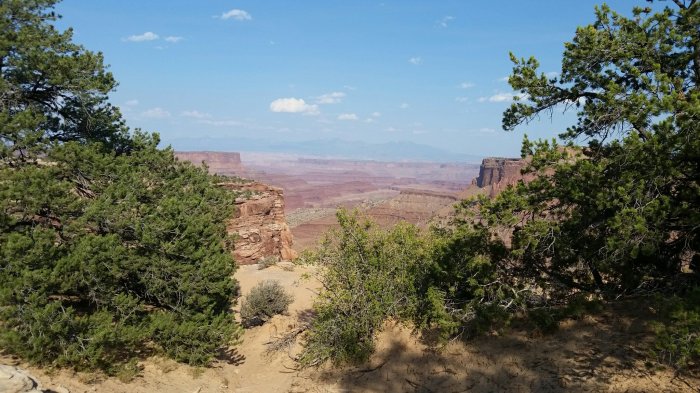 It was great to get back to Moab and show Deb this magnificent landscape. But I’m afraid this further taste has not helped my wanderlust any. In fact I think it has just got worse.

Hi my name is Glen and I’m addicted to travelling….

8 thoughts on “Exploring the Red Dirt of Moab”