Sometimes it pays not to think about stuff to much. And just be grateful for a good outcome.

This weekend I went for a spin to Gunnedah with my daughter Emma to meet her Fiancé who was riding down from Qld.

As this was her first BIG ride it was a pretty cruisey affair.  Ride a 100 km stop, then there was fuel stops,  photo stops,  and coffee stops. 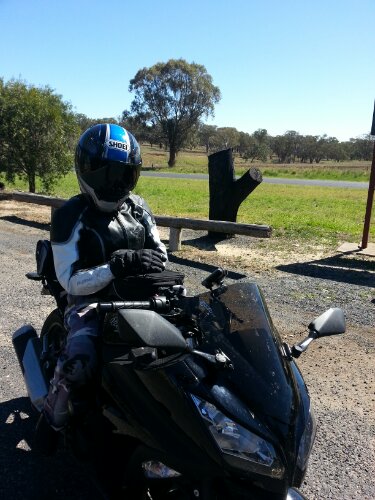 Here’s Emma at the Black Stump out of Coolah. 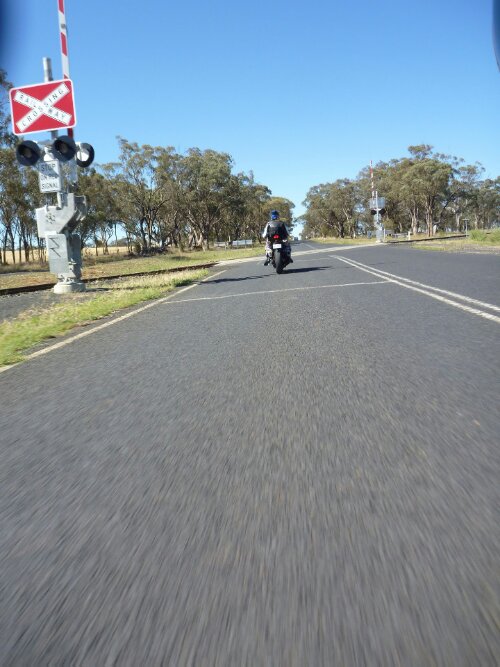 It took a bit longer than normal but it was a good trip.  And as it turned out we arrived only 15 minutes behind Bart at our rendezvous point.

The next day was a rest day before heading back to Canberra.  We were staying on a friend’s property, on the Liverpool plains, who had planned a day of sight seeing around the property on quad bikes.

All started well but within 600 meters it all turned to custard as Emma lost control and ran into a fence hard enough to snap a couple of barb wire runs.

As you can see this could have been very nasty and I know I spent some time in the ‘what ifs’ but luckily she got out of it with only 4 stitches to the forearm and few superficial cuts.  Very very lucky.!!

It did make me wonder about the relative merits of quad bikes over standard bikes.  And especially why they have thumb operated throttles which is really weird and is not intuitive when you have grown up using grip throttles.

After a bit of a search on the Internet I’m still none the wiser. It’s nearly like the quad bike just evolved from the snowmobile and those who use them are generally not bike riders.  The ideas I saw were about control and heavier steering of a quad.  But nothing definative.

Then there was the handling.

It reminded me of the feather light power steering of early Ford Falcons which provides absolutely no feel for the road. But I was told you get used to it.  But why would you want to.!

It is like these were adapted to be a farm runabout replacement.  Give me two wheels any day. !

After about 4 hours sitting around Gunnedah hospital (who were absolutely great) and with Emma all patched up we headed back for another try at touring the property.  This time in the comfort of the ute.

The thing I love about these huge properties is that everything is huge. 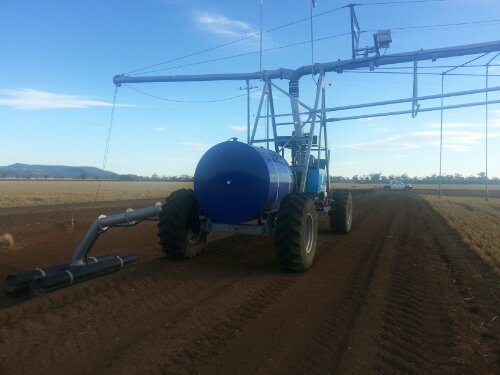 This diesel powered lateral irrigation system is all gps controlled and each part of the system knows where it is in relation to the main pumper and the paddock. Very cool.

One of the other irrigation methods they use is pivot irrigation which as the name implies, water is supplied at the center and the boom pivots from this point, rotating around the paddock.  What is staggering is that the one we saw supplied a 325 acre paddock.  That’s a similar size to the whole farm I grew up on!

Then there are the machines.  Huge!

This harvester has a 42 foot (13 meters) front comb.  Apparently there is a new bigger one coming out that is 18 meters wide.

Not a bad view late in the afternoon from one of the properties surrounding hills. 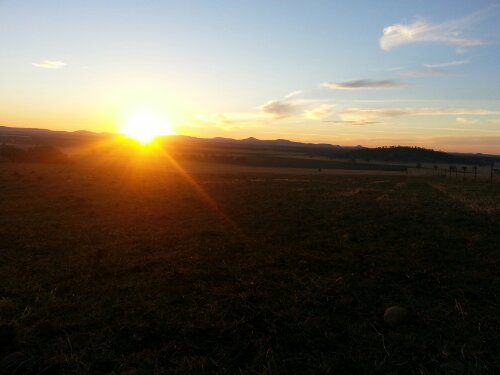 What struck me was how professional these big farms have to be and how much is actually against them.

I just hope that our public policies don’t sacrifice our long term food security for short term financial gains or ideological ideals that only we adopt.

The next question that had been playing on my mind since the accident was the logistics of getting home.  Clearly Emma was not riding home.

Kindly our hosts offered to take Emma and her bike to Wellington where we would meet some friends with my car and trailer to take the bike the rest of the way.  Thanks everyone.

It took a little while to find a suitable place to unload the bike off the 4wd ute as it was a lot higher. 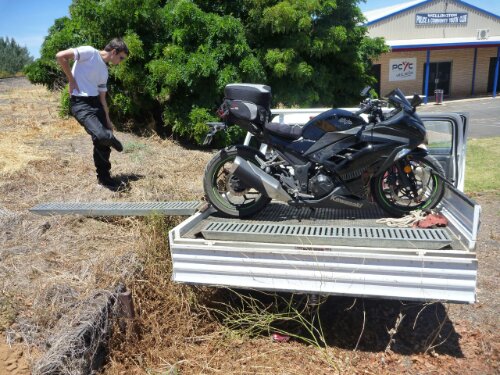 The rest of the trip was relatively straight forward with a few stops along the way for a rest in the shade.