We have now completed that trio with a fast train trip to Madrid. Such a fast smooth comfortable way to travel just watching the scenery slide fast you at a rate of around 250km/h.

Before I went on leave we were talking about the train and how it’s funny that we call it the fast train or the very fast train as a product of its speed but we don’t call planes like the 747 big planes or huge planes.  I’m travelling overseas and I’m going by the very big plane. 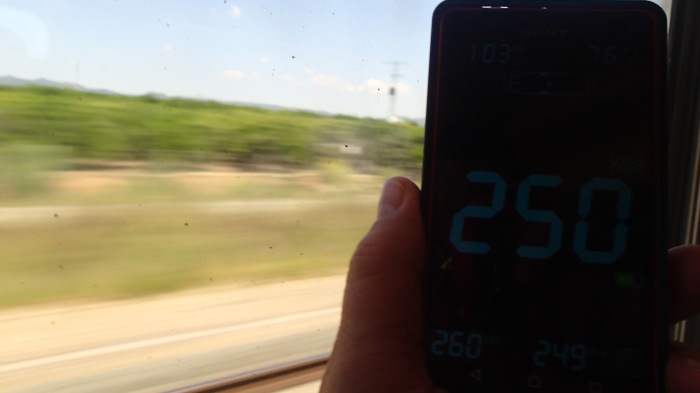 it feels faster on the bike. 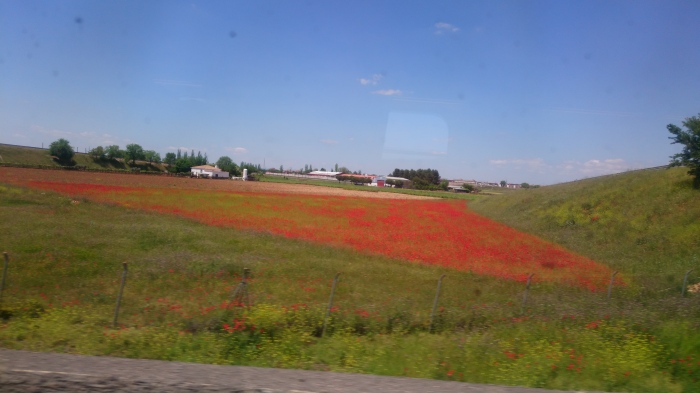 We were sitting having lunch outside at a cafe and doing a spot of people watching. However I came to realise that I was actually doing more traffic watching as it is like an orchestrated chaos, or coreographed dancing with everyone looking like they are going to crash but somehow they all just mesh in together and it works. Then on top of that you have the bikes buzzing in and around the traffic.

I was only thinking today of the first set of traffic lights that my home town got in the early 1980’s. The first time my grandfather approached them he was turning right and stopped half way through as there was a red light for the traffic on his left. Everyone thought that was quite funny. However in Spain that’s exactly how the lights work. You can have the light directly in front of you red but across the intersection green.  So you have to look at the light on your line and not necessarily in front of you.  That takes a bit to adjust to.

Bulls and bull fighting is a very big part of Spain and it’s history. Given the heritage we wanted to go out and see the Plaza de Toro de Las Ventas (the bull ring) in Madrid. It is truely a fascinating place, the size of the arena, the history, the costumes, the rules, the traditions, and the preparations that go into it. 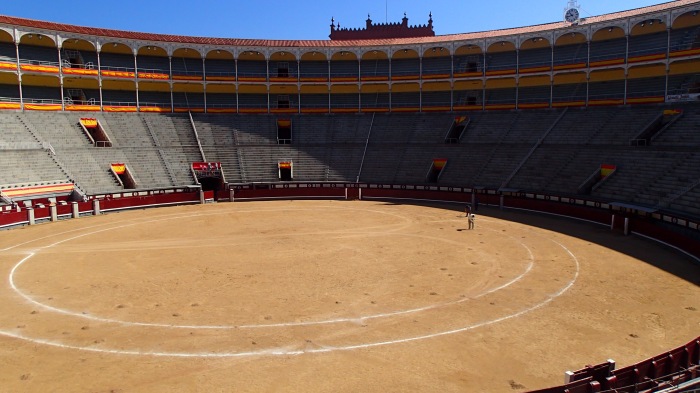 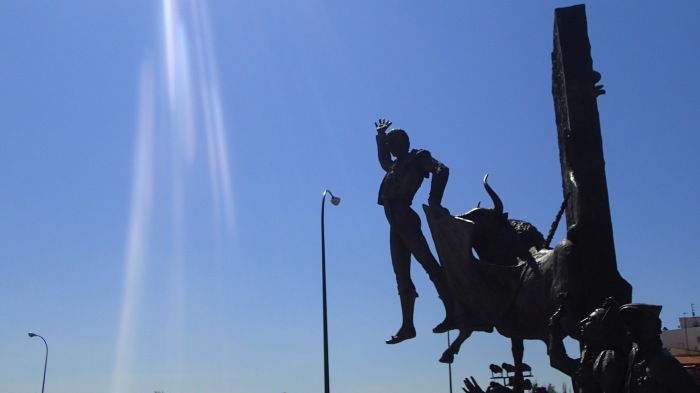 But it is very barbaric.

I’m certainly not against killing of animals. Growing up on a farm you understand that raising and killing of animals is a part of our food supply. I just don’t understand how in today’s world bull fighting is classified as sport, especially a spectator sport.  The sole purpose is to rile the bull up in the initial phases by taunting and injuring it and then the Matador comes out and inflicts further wounds and eventually he may (or may not) kill the beast with his sword. It just all looks very gruesome.

Tonight there was a bull fight. We will not be going. While I am fascinated to watch I’m not wanting to support such an industry. I do note the irony of that statement in that I have already supported the industry via the tour. Yes, that is true but now I better understand what this really is.

I would like to note that the region of Catalunya has banned bull fights with the first area in Spain to ban bull fighting was the Canary Islands.

Anyway thats enough of that.  Here are some nice pictures from the rest of our time in Madrid. We visited the Royal palace this afternoon and I have to say that it is breath taking. You walk from one marble columned room, into another tapestry lined room, to ornate gold leafed sculptured ceiling, elaborately painted or porcelain decorated. Normal stuff like that really.  Clearly they were having a couple of their close friends over as the dinning table was set for about 45 (it was hard to see all the way to the end of the table).  Clearly the table extension wasn’t pulled out as the table covered less than half the room.

The price of entry also gave us access to the Royal Armoury. This was spectacular with a rooms and rooms of different armoury (man and horse) and weapons from the history of the palace.  On display was armour dating back to the mid 1500’s.

You were not able to take photos in many of these galleries and there were guards everywhere to make sure you didn’t.

Here are a couple that we were allowed to take and photos photos of postcards. 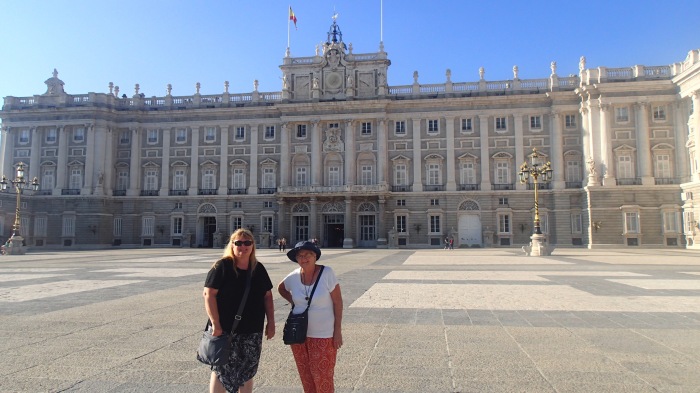 The Royal Palace – worth the €10 entry ticket 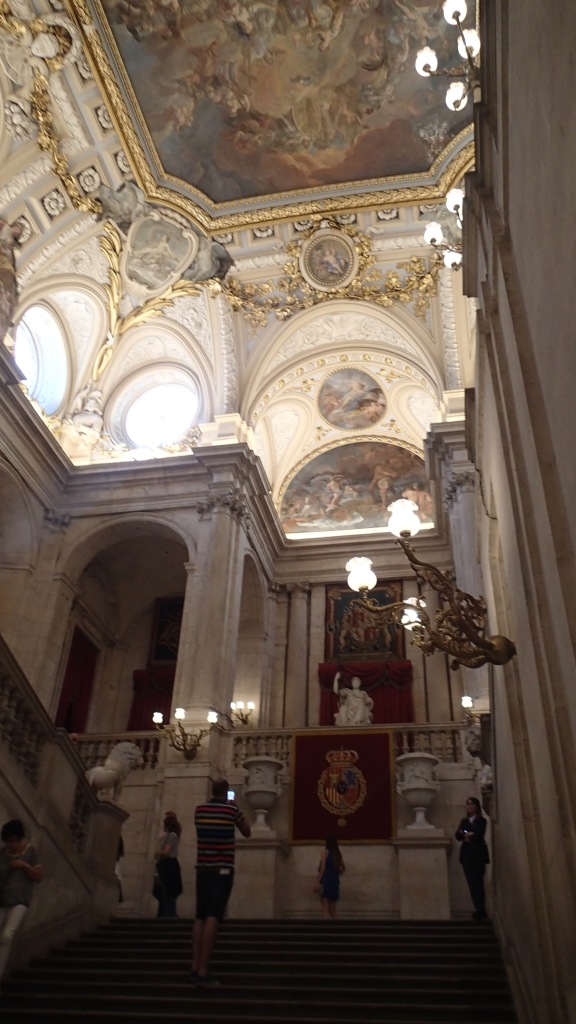 This is just the staircase in the foyer… 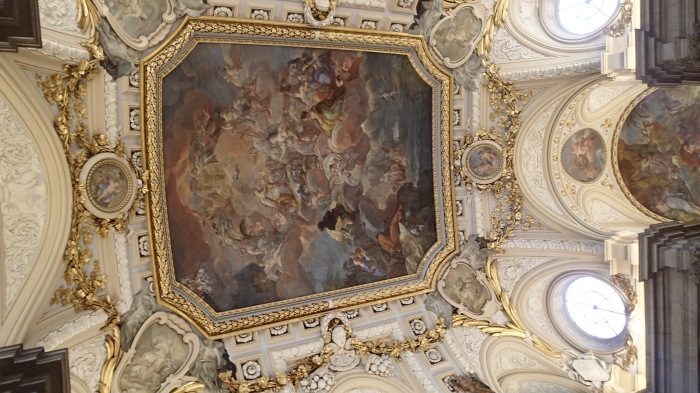 the roof in the foyer 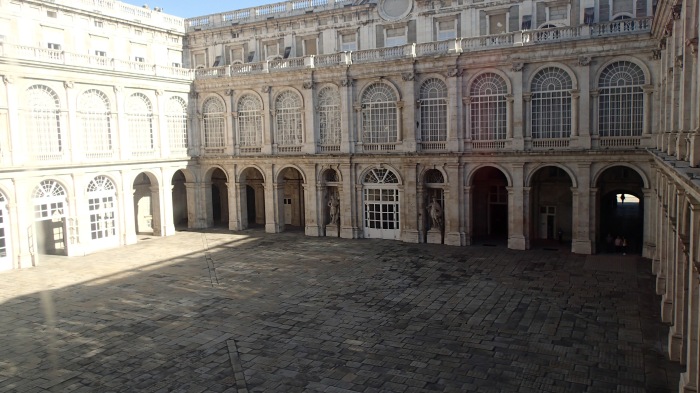 Just a small courtyard to throw a coffee of chairs out for a coffee.

And photos of postcards 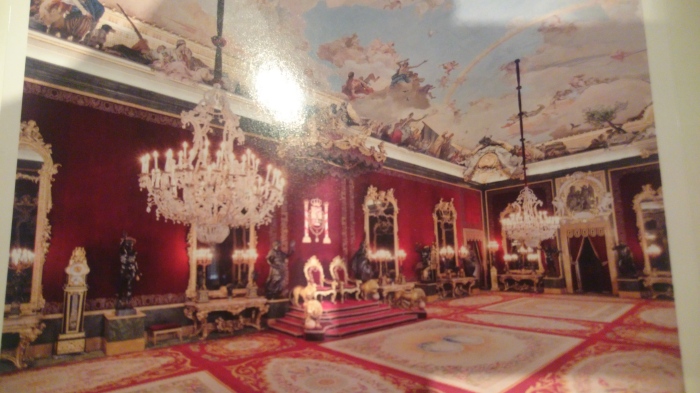 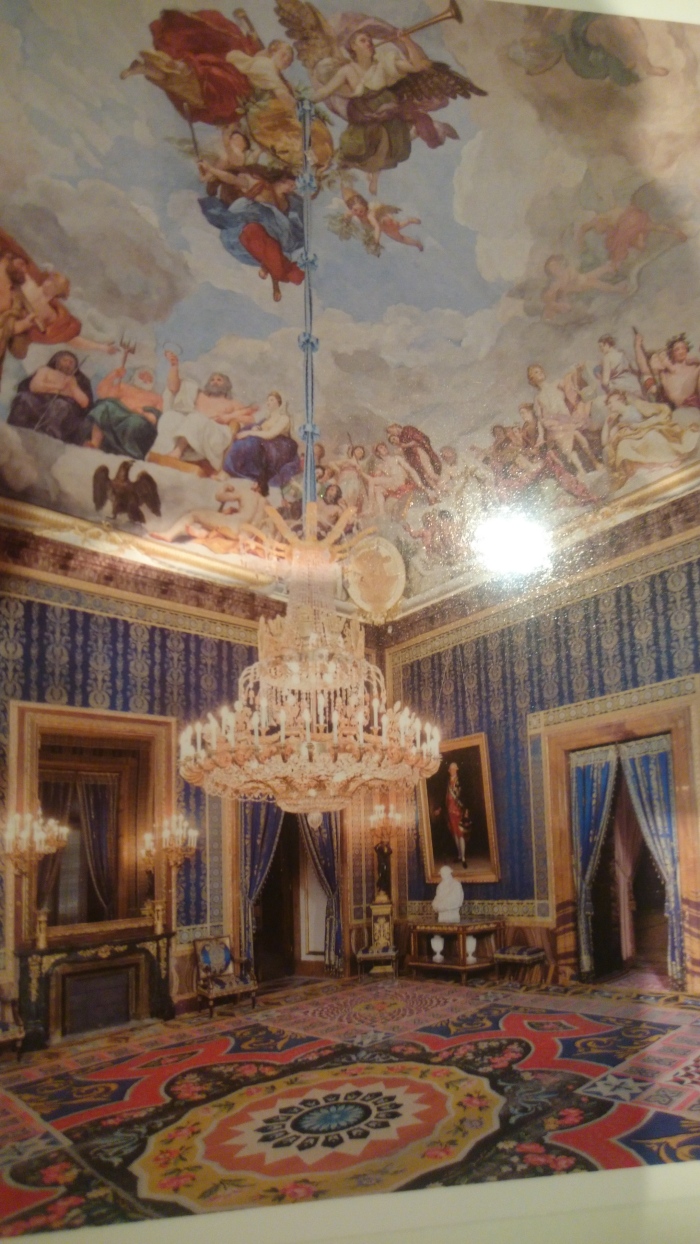 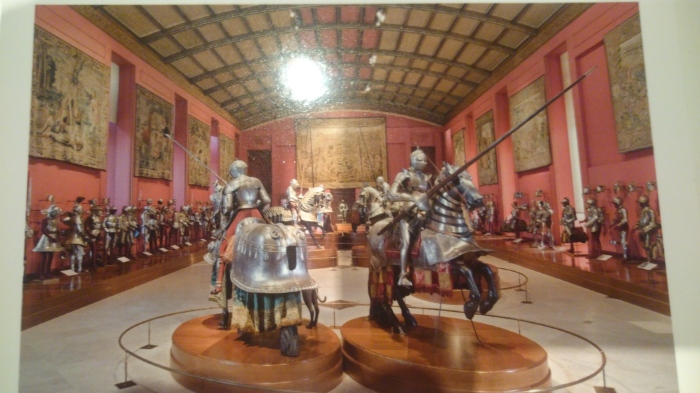 Here are a selection of other photos taken around Madrid. 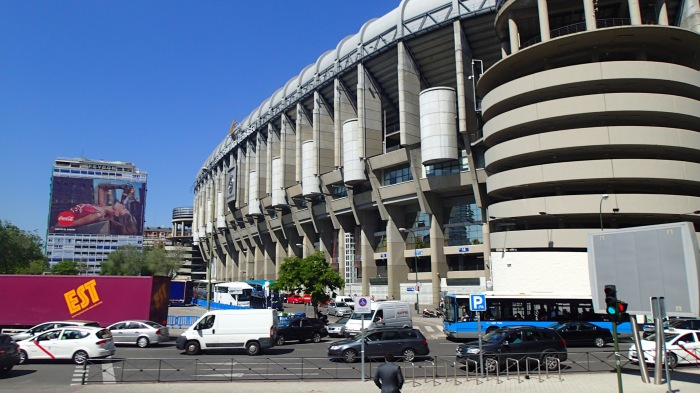 Real Madrid stadium – I would rather go and see a football game but they were not playing. Pity. 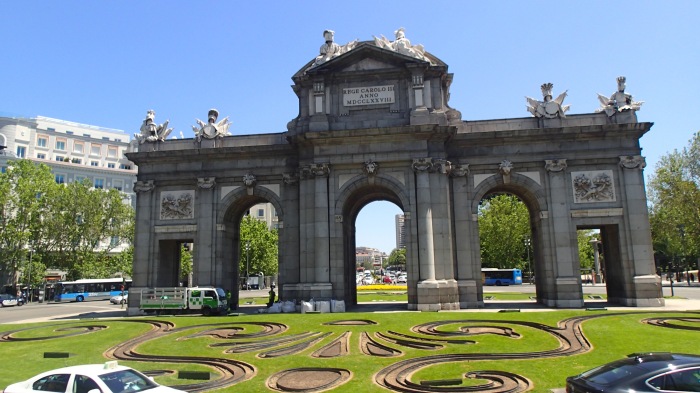 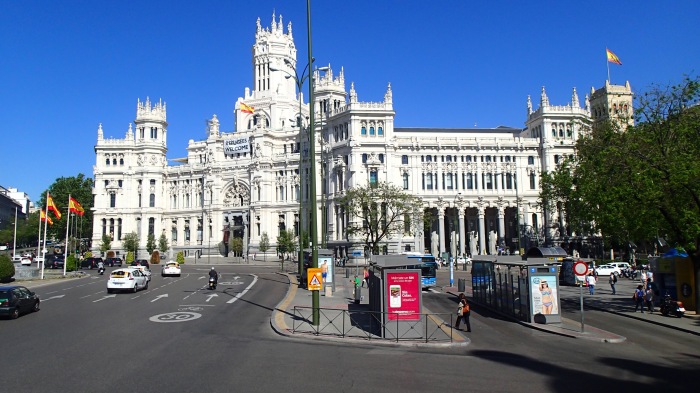 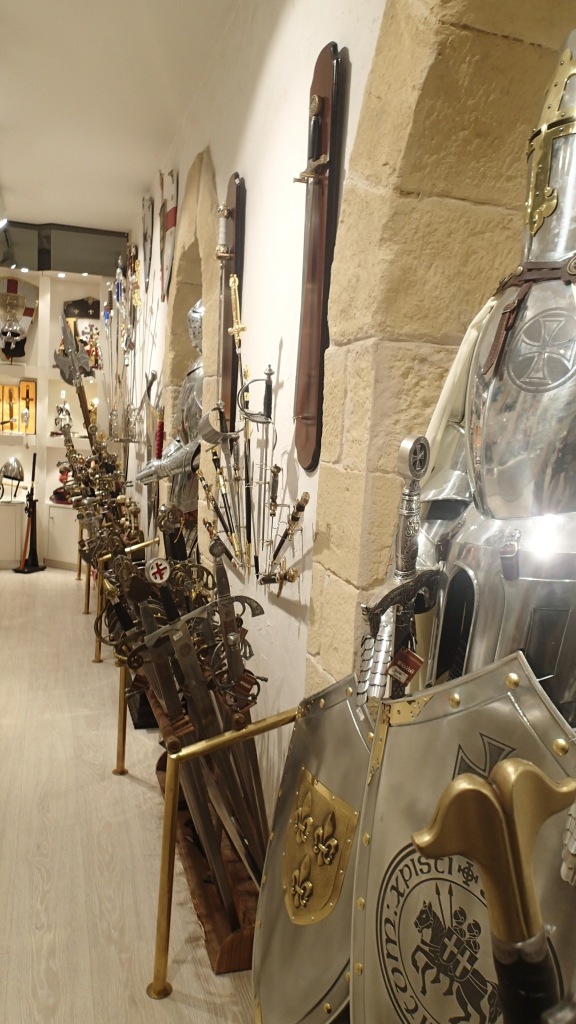 This was a cool shop. i wonder how I’d go taking an excalibre replicar sword as carry-on? 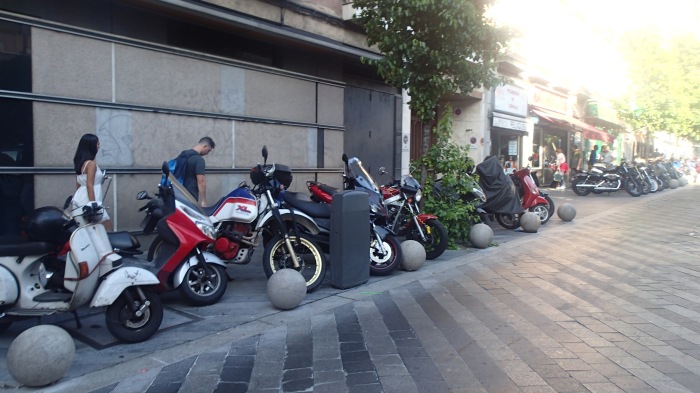 – Have both the English and Spanish addresses handy to show the cab driver. And even have the accommodations phone number handy so the cabbie can talk directly to them if there is any confusion.

6 thoughts on “Madrid – city of contrasts”