Sometimes you twist the throttle to go faster and other times you just want to take in the aural sensation that a six cylinder bike offers. It’s intoxicating.

On our way north I dropped in to hang out and go for a spin with Kevin on one of his bikes.  Knowing what bikes are in his shed I knew what I wanted to ride…

Kevin restores bikes, strips them down to the frame, powder coats the frame, rebuilds, sources and replaces parts, and breaths new life into these old bikes.  The end products are simply drop dead gorgeous.  I’m sure they didn’t look this good coming out of the factory.

I walked outside to the sight to Kevin’s daily ride, his beautiful 1990’s Kawasaki zephyr 1100 with after market 4 into 4 pipes and custom striping as a hark back to the 70’s bikes. While still a few generations old this bike is still fun to ride through the mountains with the 4 into 4’s providing the soundtrack to the ride.  However, that isn’t the bike keys I was handed – in front of me is the 80’s classic Honda CBX1000.  This was the big daddy of my first road bike, a big imposing six cylinder engine that just screams look at me. 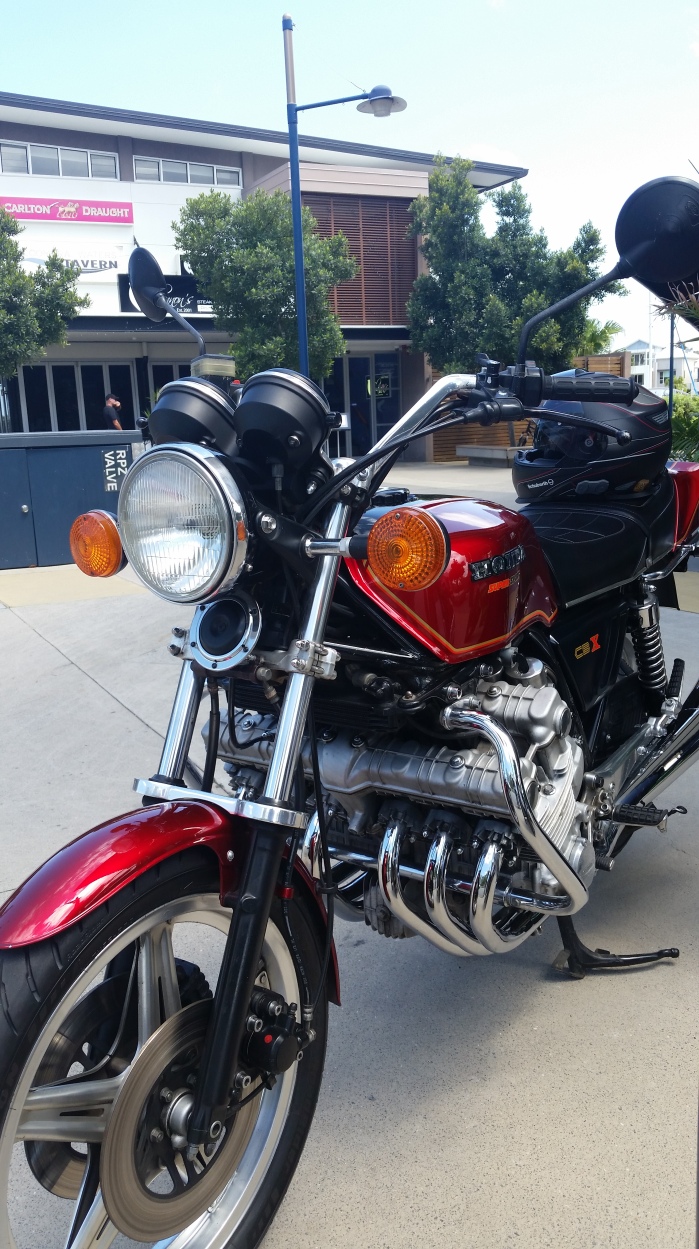 I’ve never actually heard one of these bikes running and it is a very different sound to the inline four.  I haven’t quite found the right descriptor for the sound as it’s more smoother than a big four but with a very distinctive growl.  It’s hard to resist the temptation of rolling the big 6 on and off, just to listen to all the good noises it makes.

It was great to experience the 80’s handling and the big grunty 6 on the mountain roads of Mount Tamborine while chasing Kevin on the Zephyr.  We ended up at Kevin’s mechanic, Lindsay Donia, who has done a lot of the mechanical and engineering work on Kevin’s bikes.  Lindsay is an old school mechanic and racer.  It was great to have a poke around his workshop and look at his various project bikes and race bikes, including old a couple Honda 750 4 race bikes making 140hp at the wheel.  Or his racing sidecar that he and his wife race. I don’t think I could get Deb to swing on one of these!  I couldn’t get a good photo of it as it was in the trailer but here are a few pictures of the unit and Lindsay and Chris in action.

Then after lunch we popped down to Kevin’s garage where I felt like a kid in a lolly shop with an assortment of other beauties that have been lovingly brought back to life and given pride of place.  I know I was being teased because what I really really wanted to see was one of his latest projects where he went off the reservation.  And from what I saw I say don’t let him back on.!

Take one old unloved 6 cylinder Kawasaki KZ1300 and modify it to look like one of my favourite naked bikes – the Kawasaki ZRX and there can only be one colour scheme for such a bike and that’s Eddie Lawson replica colours.  When Kevin rolled it out and thumbed the started I nearly went weak at the knees – that big six through a 6 into 2 system with twin yoshies sounded amazing! Amazing!

Link to the KZX1300 project build 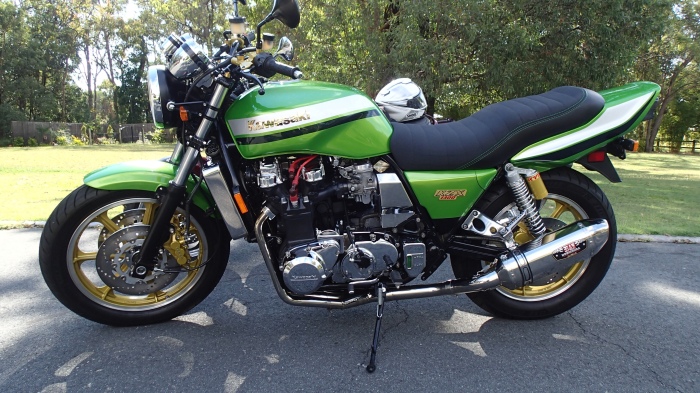 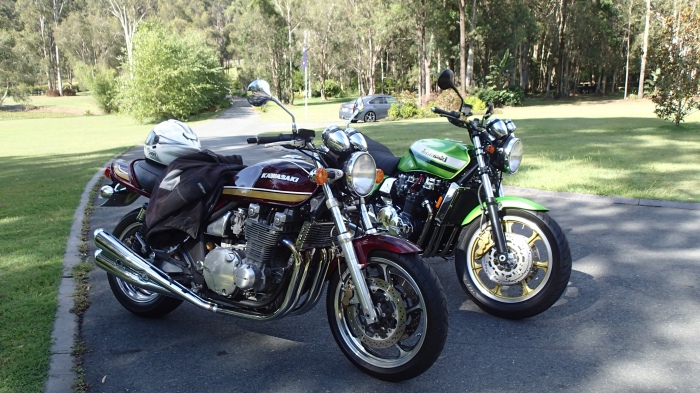 And then the 6 magical words… “Do you want to ride it?”  Don’t get me wrong I loved the CBX, the sound it made, the way you felt riding it, and attention it attracts.  But this sang my song, I have green blood and this was like meeting your grandfather when he was a teenager and hanging out with him and doing all the crazy stuff you just heard stories about and didn’t quite believe.  This wasn’t fast by today’s standards but it etched its being into me and I was not sure how I was going to give the keys back at the end of our time together.  I just had visions of me needing to be dragged away.

I love the fact that people go to this level of effort to restore these classic bikes and that they aren’t locked up in a museum but out on the road in their natural environment.  But equally I like to see the mold broken and amazing creations brought to life.

A huge thanks to Kevin, it was great catching up and sharing your passion.  I hope I can return the favour and introduce you to the KZX’s would be wild child descendant – the ZX14R.

My kind of crazy…