To date most of my ride fitness training for Deb has been limited to day rides.  However, the ride in the States is going to be two weeks of constant riding so we need to start backing up ridings days.

Over the easter weekend we travelled to Inverell for the wedding of my mother-in-law. Part of our travel plan was to take my daughter’s motorcycle (Suzuki SV650) and some addition stuff with us that they couldn’t fit in when they moved north a few weeks earlier.

As I was already taking the trailer a plan was quickly hatched to take my bike as well and get my other daughter to bring the car and trailer home giving us a couple of free days on the bike to get home.  In the end the car and trailer was quite loaded with every nook and cranny of space taken, even on the bikes!

I have to say I wasn’t sure how the Liberty would go packed to the gunnels, with 4 adults and towing a trailer with 2 bikes. In the end it surprised me and the cvt gearbox did a great job of keeping the power to the wheels. I certainly wasn’t expecting great fuel consumption and thought 13.1 litres / 100km wasn’t too bad for the 900km trip. Normally for a trip like this with just the 2 of us we get low 7’s.

Leaving at just after 3am put us in Inverell just after lunchtime.  By the time we unloaded the car we went quickly into full swing wedding mode.  Rehersals, dinner, and organising.

Often when we think of blended families we picture young kids from two different families coming together.  The reality is that any remarriage at any age is a blended family; bringing together two different families with their own histories, values, and world views.  As adults we may be better at processing these changes happening to our family, but we also need to acknowledge the inner turmoil of dealing with this new altered reality.  Reconcilling that nothing is going to be quite the same again.

Today was the start of a new chapter not only for Lyn and Rod, but also for both extended families.  I would like to wish Lyn and Rod all the best for the future.

Sunday morning rolled around and it was time to say goodbye to all the family and hit the road.

Getting ready to go our separate ways.

After a quick conversation I arrange a meeting point with Julie so we could share the road for a few miles and then find a coffee shop in Uralla and take the opportunity to sit and chat over a coffee and hot cross bun.  Life gets so hectic, it’s nice to catch up and shoot the breeze for an hour or so. 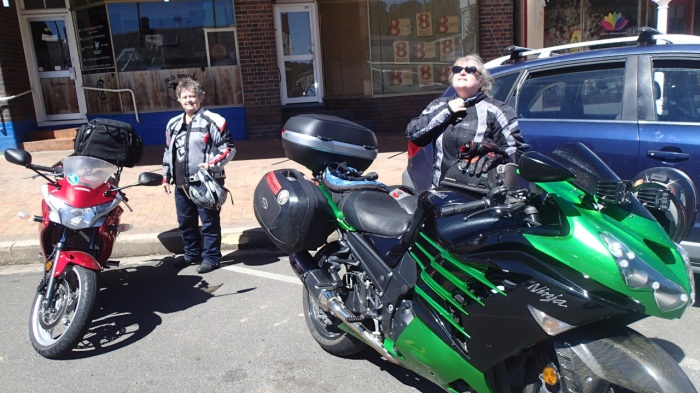 From Uralla we just rode down the New England highway, the Oxley Highway, and then the Newell Highway to our overnight stop in Dubbo.  After a bit of playing with Deb’s intercom over the last couple of weeks this is the first time we have been able to hold a conversation at highway speed (hint – speaker placement).  And although we don’t talk a lot during trips it was nice to have helmet time to reflect on the past few days and then talk it through.

Today’s ride was approximately 560km and the roads were really busy with people going in either direction. At one stage I counted a dozen buses heading north to the Gold Coast for the Commonwealth games (well I’m assuming that’s what the “Gold Coast 2018” sign meant).  With all that traffic it’s great to be on a bike as you can just flow through the traffic with minimal of fuss.  Overall it was a great day on the bike, although the temperature was a bit of a surprise with most of the day over 30C.  A couple of photos during the days ride.

Checking out Saturn – one of the billboards on the Solar System Drive.  I have previously captured a set of planet billboards to the Sun.

After getting to our motel, having a dip in the pool and then having something to eat we crashed like a couple of oldies.  It’d been a big weekend so far.  Dead to the world by 8pm – the only thing consoling me was that today was the first day after daylight savings finished so it was actually 9pm and that doesn’t sound quite so bad…!

Day 2 comes around eventually and with only 400km to cover today there was no real sense of urgency so after a casual breakfast we packed the gear and hit the road.

Unlike yesterday, today we were not on major highways but they were still jammed packed with people making their way home from their weekends away.  I’m sure the car drivers were cursing the ease at which we were moving through the traffic while they were stuck in a never ending congo line of nose-to-tail traffic.

As we rolled into Cowra it was close enough to lunchtime to stop for a bite to eat.  The Rose Graden Cafe in Cowra is always a nice place to stop with nice coffee and great meals.  Highly recommended over McDonalds which is right next door.  Not fast food but good food (well that’s what the sign said), ideal when you just want to take some time off the bike.

As we hit the Hume highway just out of Yass the traffic was just nuts.  In need of fuel we bypassed the Yass Service Centre, which was completely congested with overflowing waiting traffic spilling out and onto the roadway, and went into Yass town centre to get our fuel.  From Yass we made our way home pulling in at 2:30pm after covering around 960km in the last couple of days.

6 thoughts on “The training continues”