In Rome and Venice we have stayed for three nights in each, that’s in contrast to the two nights for our Spain trip in 2016. For a limited stay three nights is a good compromise as you have the opportunity to learn the lay of the land, how to get around, do a few touristy things, and just soak the place in. Two nights just felt rushed. Obviously the more time the better, but we have limited time and money.

Today we checked out the Doge’s Palace and St Mark’s Basilica.

The Doge was the ruler of Venice and elected in a complex multi-round ballot process. The palace was their home, the seat of government and the place of their judiciary.

The palace was meant to be a statement to all who visited, very ornate, adorned with paintings (that spoke of their wealth and importance in the world), and 24 carat gold leaf everywhere.

This is where a guide is good – to provide some interpretation behind the paintings.

Venice encouraged/rewarded citizens to dob in people who have done the wrong thing. To do this – the citizen would write down their concern and sign it (it could not be anonomous) and post it in the special lions mouth mail boxes around the city. The post boxes were double locked so it took two councillors to open the box.

But if you submit a false accusation you would get the penalty of what you were accusing the other person of – this could include prison, which is also on site. This was done to stop vexatious claims.

St Mark’s Basilica was an amazing place and unlike most basilicas this didn’t have a painted roof but the whole ceiling (and some of the walls) contained complex mosaic pictures made up of small glass tiles. And between all the pictures are gold glass tiles – so the whole ceiling was a dazzling gold and when the light shone on it, it just lite up. (No photo allowed in the church)

As Venice is so young and wealthy it wanted its own patron saint so the story goes that they ‘aquired’ the remains of St Mark from Egypt in 828 when a group were sent to retrieve (smuggle) back the remains.

One of outside mosaics depicts the scene of the bones hidden in a crate of pork and the muslim custom officials not wanting to look. 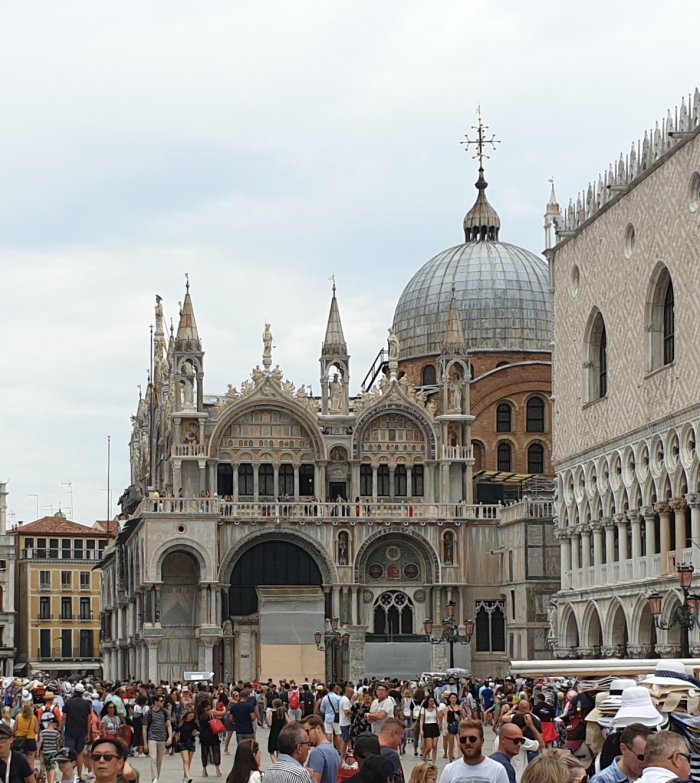 And a couple from the roof of the Basilica

For our final night we went to an old church for a baroque concert with 4 violins, and 1 viola, cello, double bass, and a harpsichord player. In the big old church the acoustics were amazing and while I’m generally not into this type of music – live it was a great experience.

A couple of travel tips

The place isn’t that big so if you like walking it’s pretty easy to get around (and google maps is a big help).

While I did a bit of research before we left it didn’t really make sense until we saw the place and got a feel for how it worked.

While it is great to be spontaneous, you can save yourself a lot of time if you book a tour that gets you straight in rather than lining up for hours just to get in.

And don’t forget to bring your own headphones as the cheap disposable ones they give you are uncomfortable if you have to wear them for a few hours.

Initially I made the comment that Venice was an old place made into a big shopping centre.

I don’t think I was wrong, but what Venice does offer is an incredibly unique location with an interesting history. It’s not a place I’d go to just kick back, but it’s certainly a place you need to go and experience.

Outside the touristy world it is still a city with the same needs. It was interesting to just observe the reality of living and working in city that was a cluster of many small islands – barges moving around with building materials and freight, barges with cranes and cement trucks chained down – guys with special carts navigating the narrow paths with deliveries – people working and studying.

Tomorrow we jump on the train and head to Switzerland…

2 thoughts on “Venice – the last day”